In today’s technological landspace of instant-email and 140 character status updates, it’s nice to see an archive of historical letters and significant correspondence.

A personal favourite online at the moment is Letters of Note, which the editors’ describe as ‘an attempt to gather and sort fascinating letters, postcards, telegrams, faxes, and memos’.

My favourite on the site has to be a released memo sent to Richard Nixon to be read out in the event of disaster for the Apollo 11 Moon landing on 20 July, 1969, which you can see below (and transcribed here). 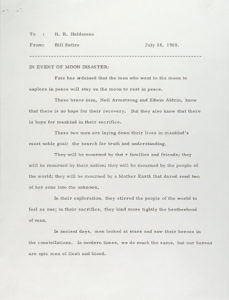 It questions how many of these articles were written in the event of other major historical events failing.